At fertilisation, a new and unique human being comes into existence with its own distinct genetic code. Twenty-three chromosomes from the mother and twenty-three chromosomes from the father combine to result in a brand-new and totally unique genetic combination. Whereas the heart, lungs, and hair of a woman all share the same genetic code, her unborn child, from fertilisation, has a separate genetic code that is all its own. There is enough information in this tiny zygote to control human growth and development for the rest of its life.

At about eight days after conception, the fertilised ovum (called a blastocyst) implants in the lining of the uterus. It emits chemical substances that weaken the woman's immune system within the uterus so that this tiny "foreign" body is not rejected by the woman's body.

By the third week (approximately 21 days after fertilisation), the heart begins to beat, pumping blood throughout the body, and the brain begins dividing into three primary sections (forebrain, midbrain, and hindbrain).

Arms and legs begin taking shape at four weeks, and the embryo is now surrounded and protected by the amniotic sac.

Permanent kidneys appear during the fifth week, and the external portions of the ear begin to differentiate. Hands and wrists are also beginning to take shape.

By the sixth week, an EEG (electroencephalogram) can detect brain waves. This is the legal standard for determining if someone is alive after birth. The heartbeat can be heard with an ultrasonic stethoscope, the embryo responds reflexively to stimulus and may be able to feel pain. Bone ossification begins at this point as well. 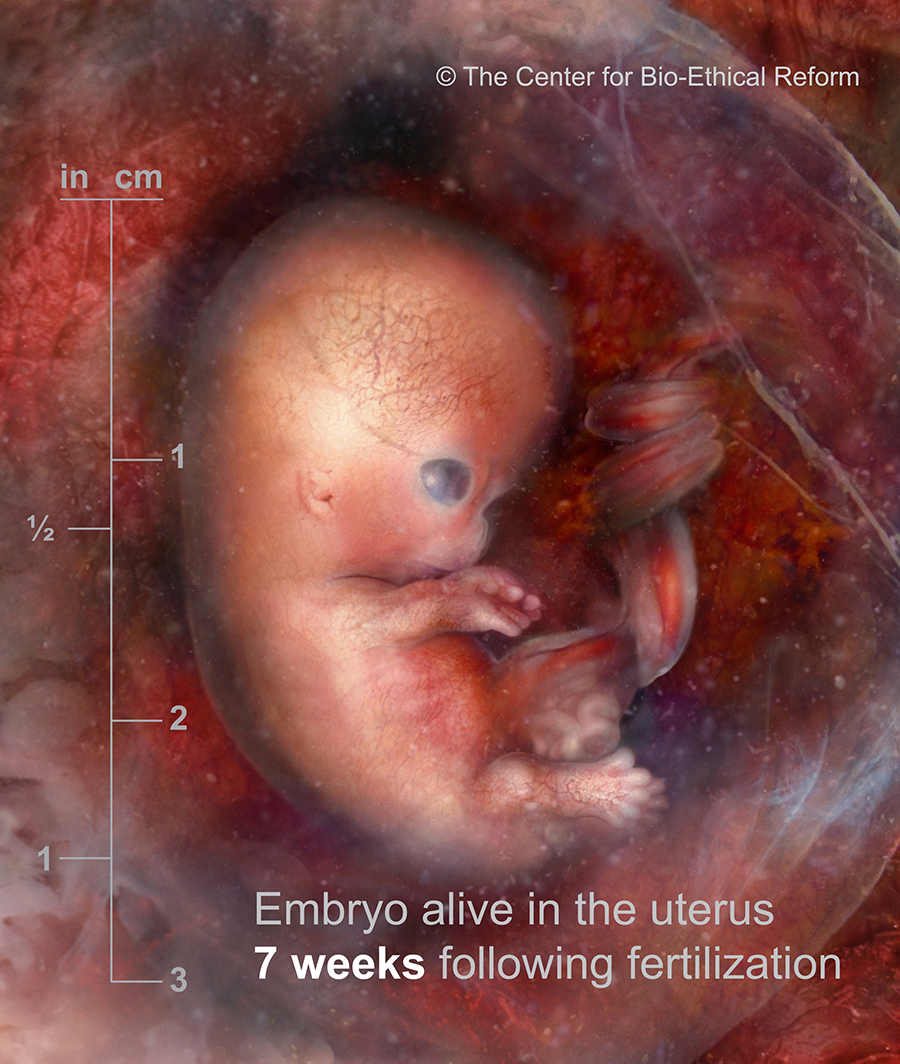 Startle responses can be observed after 7 weeks, and female ovaries are now identifiable. Fingers and toes are now distinctly separated, and knee joints are present. 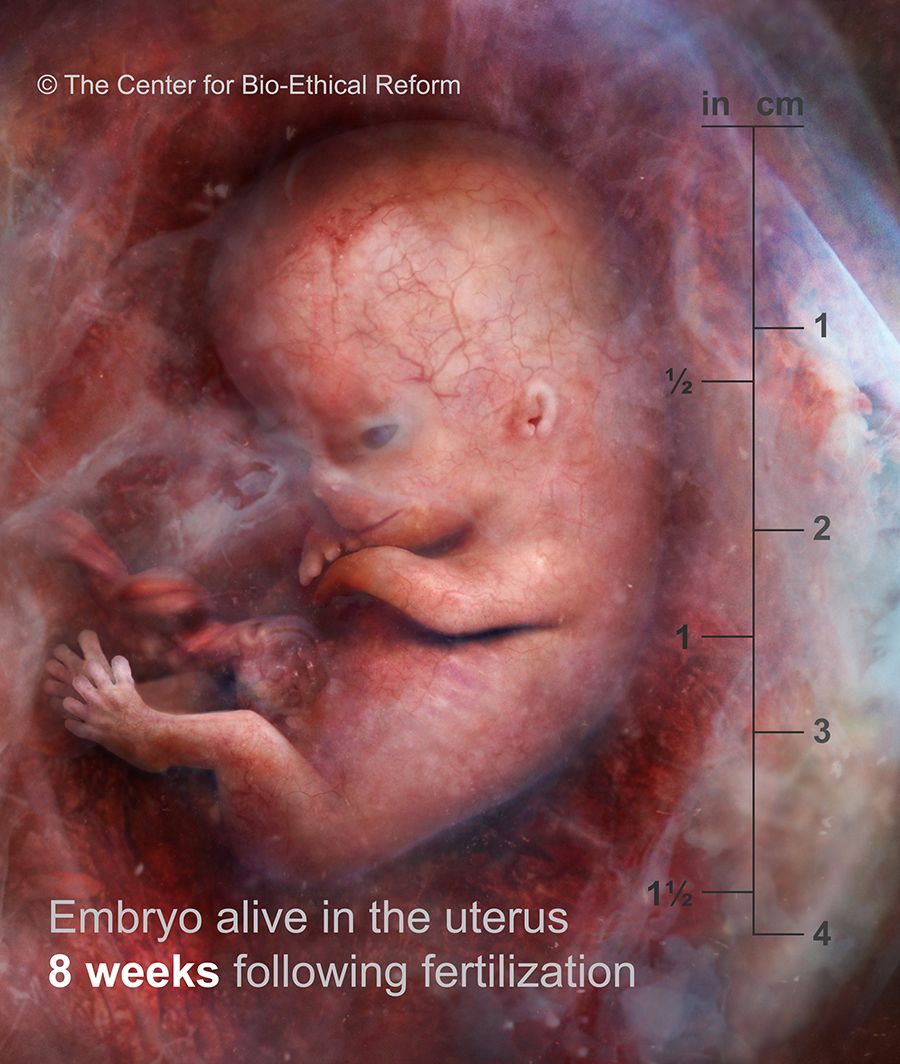 By the eighth week following fertilisation, every organ is present and in place. Ninety percent of the structures found in an adult human being can now be found in this tiny embryo which is only about an inch and a half long. The brain, at this point, makes up almost half of the embryo's total body weight, and 75% of 8-week embryos demonstrate right-hand dominance. Intermittent breathing motions (though there is no air present in the uterus) occur, the kidneys begin producing urine, and male testes are releasing testosterone. As the skin thickens, it loses much of its transparency. 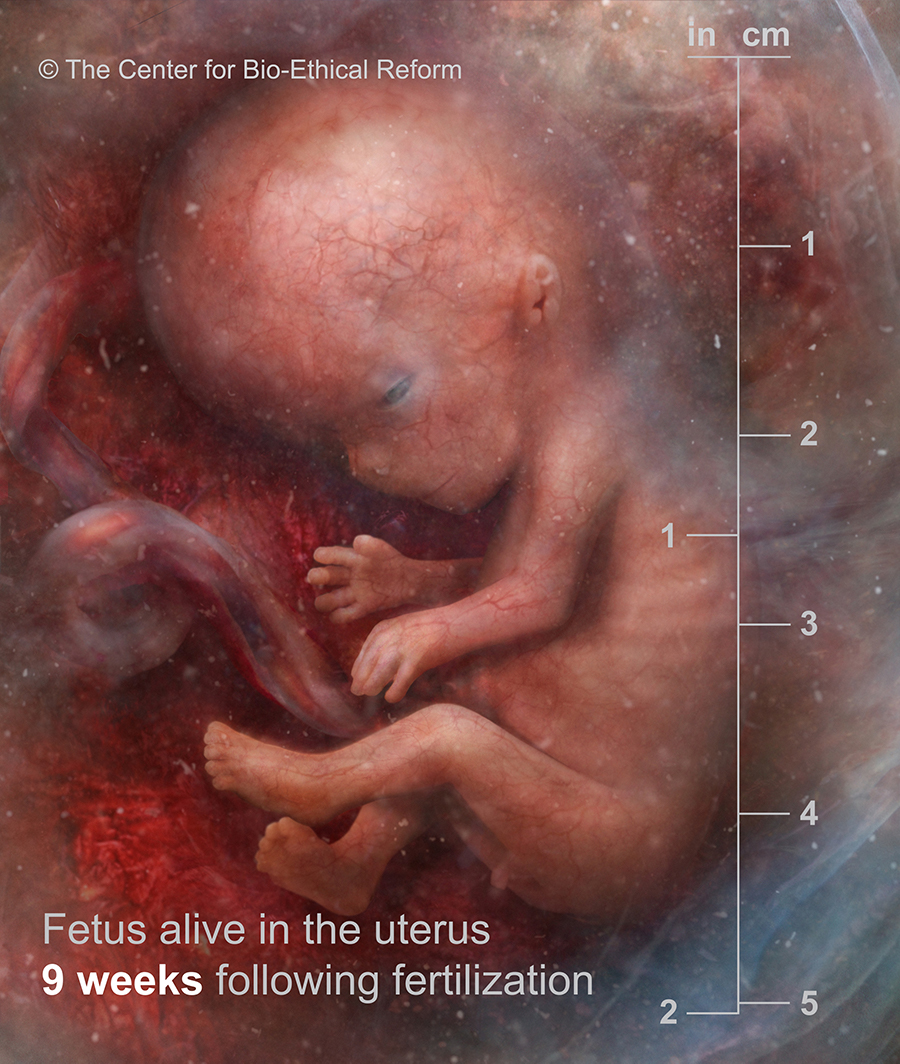 The eyelids close at this point, and fetuses are now capable of sucking their thumb, swallowing amniotic fluid, grasping objects and responding to touch. The uterus can be recognised in female fetuses and external genitalia become more recognisable. 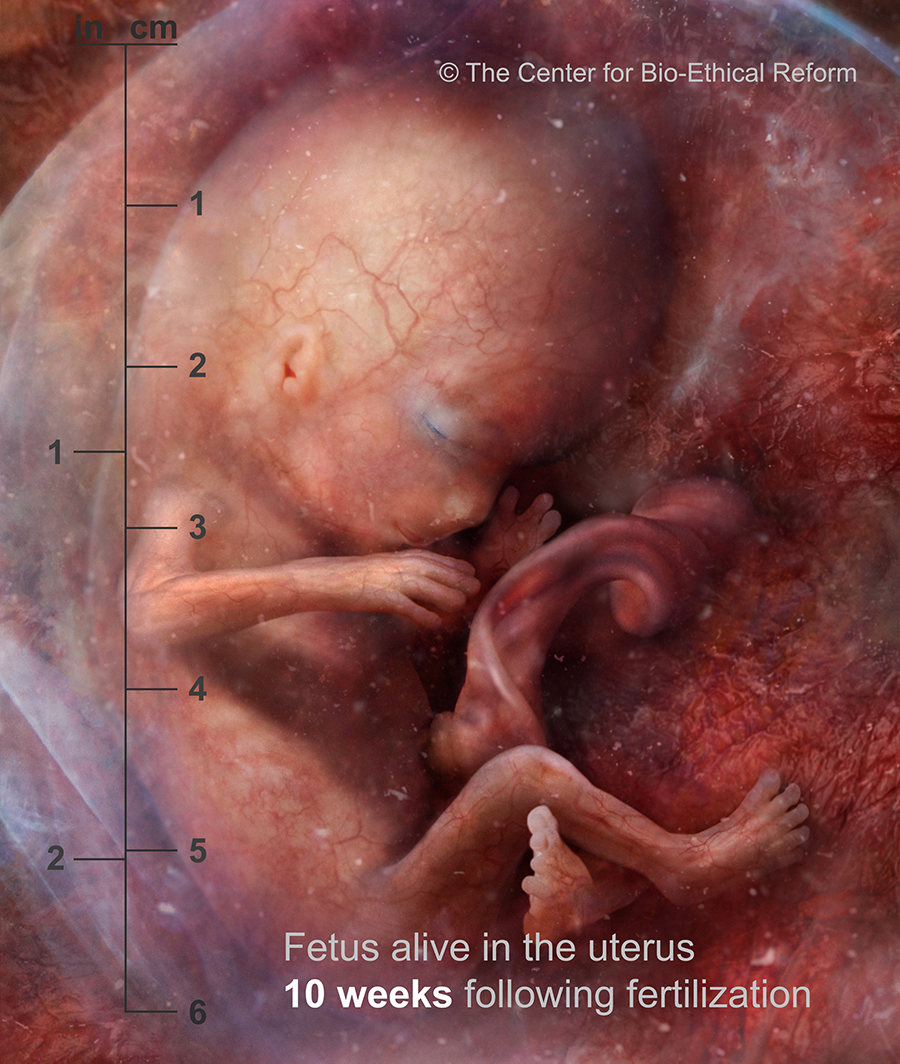 Viability generally begins at 21-weeks (barely 1/2 of full gestation) when a baby has a 15% chance of survival outside the womb.

The fetus initiates labour by stimulating the adrenal cortex to secrete a hormone that induces the mother's uterus to begin contracting. It is the fetus who determines when it's time for birth.